Blog > Fascism in the East End

Fascism in the East End

In October 1936 violence erupted on the streets of the East End. The British Union of Fascists, inspired by Hitler’s Blackshirts, decided to stage a march through the largely Jewish East End. They were met at Cable Street by 100,000 anti-fascist protestors and driven out, but even after the Battle of Cable Street the Fascists remained popular in Bethnal Green. At Oxford House, the residents watched with alarm. Writing in the aftermath of the battle, they said, ‘There has been an amazing increase of feeling against the Jews and such an undesirable state of affairs cannot be ended by pretending it does not exist’.

‘Endless meetings and demonstrations’ generated strong public feeling. ‘An impartial observer must admit that the ordinary man in the street gets better value from the Fascists than from their opponents … Promises of a better world and prosperity all round are received in silence, the audience has heard all that before, but abuse of the Jews is warmly applauded’.

The theology students of Oxford House blamed the popularity of the Fascists on the poor quality of life in the East End, speaking of ‘the resentment and fear of losing his livelihood’ of ‘the average East Ender’. For unemployed youth, they claimed;

‘Pleasure and excitement are the sole objects of existence, gambling has become an ingrained habit, and the sense of duty has not been developed in any way. The widespread ideals (through films and cheap American magazines) of success through violence and smartness have influenced their outlook, and this claim is a prolific ground for the growth of hooliganism and predatory activities.’ 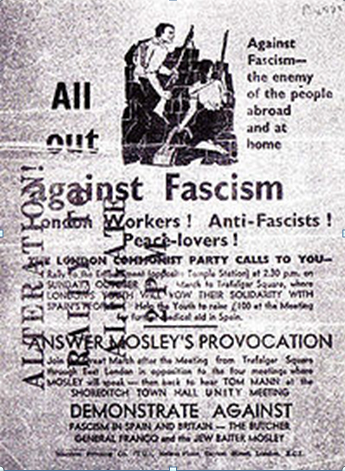 It was this ‘sense of duty’ that Oxford House tried to develop, providing Men’s’ and Boy’s clubs to educate and entertain the community. Despite their efforts, however, the Fascists won 23% of the vote in Bethnal Green in the 1937 local elections, and their popularity would prevail until the outbreak of war.