DONATE
HomeBlogVolunteerSpace HireAbout Oxford HouseContact UsPrivacy Policy
Blog > Have a drink and even join in with the songs!

Blog > Have a drink and even join in with the songs!

Have a drink and even join in with the songs!

They say all good things coms in 3, thus the Folks and Flowers music concert had to be part of the fringe festival for the 3rd year in a row. Oxford House was so excited about hosting this event that we managed to get a sneak preview of what to expect by conducting an interview with the organiser of the Folks and Flowers event – Wendy Lanchin. 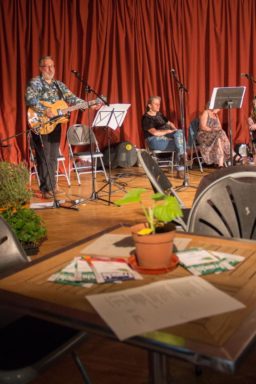 Whilst many people may not be familiar with folk music, the fundamental of it, like with any genre, says Wendy, is “great tunes.” There will be also a range of styles ranging from traditional folk songs to modern folk ballads, so there is something everyone can enjoy.

The event will feature incredibly talented musicians who have their own distinctive styles (Dave Clare, Marie McCormack, John Watterworth, Lucy Baxandall & Wendy Lanchin herself). Hazel Askew is perhaps the most renown and is one of the special guests of the event. She has won many awards including the 2011 Spiral Award for best female singer. Askew regularly performs in a duo with her sister as the ‘Askew sisters’ and the pair have released 3 critically acclaimed albums. Askew also is a third of the popular vocal harmony group ‘Lady Maisery’, who were nominated for the Horizon award at the BBC Radio 2 Folk awards 2012.

The second special guest will be Carol Anderson. Anderson is a highly regarded fiddle player from Aberdeenshire. Anderson has a distinctive style as combines East Cost and West Coast influences in her music. Anderson is extremely talented and again a huge coup for the event.
When asked what Wendy hopes people get from the event, she replied “a great night out, where people can enjoy the atmosphere, have a drink and even join in with the songs.” This should and will constitute to an amazing night. We look forward to seeing you there.