The story of Oxford House begins in late Victorian period, on 8 September 1884 — a time of a growing awareness of the plight of the working classes. OH was one of the first settlements established by High Church Anglicans from Oxford University, who were eager to bridge the social gap and bring the well-off students face to face with poverty. Led by a strong Christian social ethos, the first Heads of the House saw bringing people to a personal faith in Christ inseparably linked to the bettering of their living conditions.

On the left: The first Oxford House in the disused school of St Andrew’s. On the right: A view of Weavers Fields, where the first OH once stood

Oxford House had its first premises in the disused school building of St Andrew’s in Bethnal Green. The school could accommodate only five residents, but despite its lack of space and incommodious nature, students came down from Oxford finding lodgings elsewhere in Bethnal Green. A resident had no need of particular skills. The willingness to interact with and understand the working man was vital. As one of the first Heads, James G. Adderley, explained: “For if he cannot preach in the streets, he may be able to play football on a Saturday afternoon.” 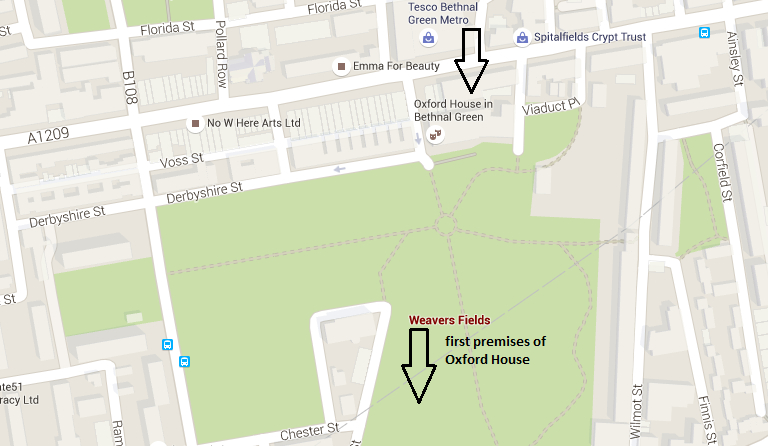 The House put great emphasis on running Clubs for working class boys and men, which offered opportunities to socialise and pursue leisure activities. Sports in particular were a great favourite. The House did not only strive to provide healthy amusement, but also to promote intellectual and cultural activities. Its busy programme featured concerts, plays, debates and lectures on topics such as literature, history, philosophy and ethics. An important part of the early settlement work was also the Heads’ Sunday lecturing at the then lively speakers’ corner in Victoria Park. It was a popular working class weekend hangout and it allowed the first OH leaders to interact with a wider public.

Addressing the social issues in the area was another major concern of the OH residents. They worked on improving sanitary conditions, helped the unemployed, homeless and the sick. Some of the services that the House offered — the sick fund, poor man’s lawyer, labour registry for those out of work and mutual loan society — were pioneering for that period.

By 1892, when the present-day building was inaugurated, the House was firmly rooted in the area. Its engaging spirit and principles influenced some of the later university settlements that sprung up around London.