During the war, 80 tonnes of bombs were dropped on the Borough of Bethnal Green, with approximately 9 bombs falling in the immediate vicinity of Oxford House. Luckily, the house itself was never hit, but many homes across Bethnal Green were heavily damaged. After the war ended, attentions turned to the regeneration of the area, and creating a better standard of living conditions for the residents. 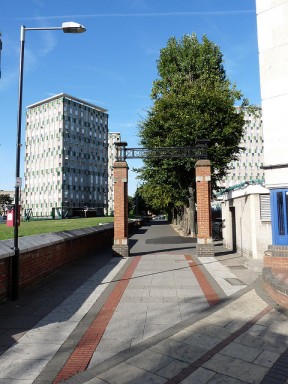 In 1957, the cottages of Mape Street and Derbyshire Street, amongst which Oxford House was located, were demolished, and a growing appreciation for open public spaces was met with the eventual planting of what is now known as Weaver’s Fields. This park was finally completed in 1967. Other areas that experienced clearing and rebuilding was the Cranbrook Estate, off Roman Road in Bethnal Green. High rise flats were designed to make use of limited land availability whilst giving families enough space.

The slum clearances, although intended to decrease social problems and raise standards of living, sometimes exacerbated the problems. With hasty demolition, social networks were severed with entire streets being demolished and its residents sent to live in new high rise flats, where connections were very different. Some rebuilding did not happen due to lack of funds, and families often had to move away from the area permanently. Oxford House was an enduring presence during this time, and held its traditions, acting as a central link for the changing community.

By continuing the various clubs and activity programs as well as offering free advice and help centres, Oxford House continued its mission of providing essential social services as Bethnal Green developed in the decades following the war.