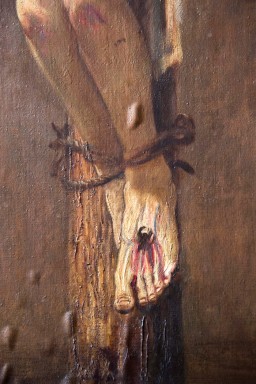 The Chapel at Oxford House contains a valuable reredos displaying the Crucifixion by Alfred Soord (1868-1915). The painting is signed and dated 1914 on the bottom left corner.

Alfred Usher Soord was born in Sunderland and brought up in York. He studied at the York School of Art and at the Herkomer School of Painting at Bushey. He worked also as a magazine illustrator, and by the time he painted the Crucifixion he was an established artist. Some of his artworks – including landscapes and portraits – were exhibited at the Royal Academy of Arts during the late Nineteenth Century.

Saint Barnabas Church in Homerton also has another Crucifixion and The Good Shepherd, known also as The Lost Sheep, one of his most popular paintings. Both of them were originally located at Saint Andrew’s Church in Bethnal Green before its demolition.

The painting at Oxford House still remains in its original place. Christ’s body on the cross shows the typical features of the Christus patiens (suffering Christ) iconography: the bowed head and the closed eyes mean that Christ is dead. The lifeless body seems falling down because the weight is sustained only by the nails stuck on his hands and feet. The flowing blood can be seen also on the white cloth which covers the genitals, augmenting the perception of the suffering. 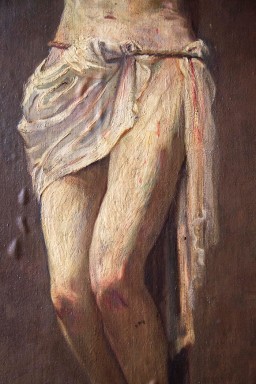 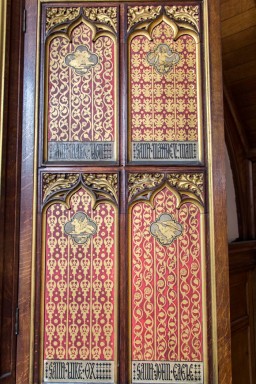 Soord makes the painting even more realistic where the brush stroke is viscous in comparison with the wooden cross; or where the white skin of Christ is contrasted with the dark sky on the background. Moreover the modernity of the painting can be noted on Christ’s hair: they are depicted by little brush strokes and spots of red-brown colour, which give a natural perception if seen from a certain distance. The strong chiaroscuro effects – light and shadow – on Christ’s face are an example which shows again how Soord worked with his brush.

Finally the Neo-Gothic reredos, as part of the chapel craftsmanship, has some noteworthy details, related to the Christian doctrine that underpinned Oxford House’s High Church and Oxford Movement heritage. With the panels open they reveal symbols from the Old Testament on the left panel, and New Testament on the right one. Four sacred animals from the Old Testament – “The Lamb without Blemish”, “The Scapegoat”, “Two Turtle Doves” and “The Brazen Serpent” – and the Four Evangelists of the New Testament symbolised by their animals – “Saint Mark Lion”, “Saint Matthew Man”, “Saint Luke Ox”, “Saint John Eagle” – are depicted by a bright gold ornamentation on a red background.