When Oxford House founders first set out to improve the living conditions of London’s East End, they did so by opening a number of Clubs. In the winter of 1888, the Webbe Institute was born and named after H.B. Webbe, a famous cricketer and philanthropist. The community’s response was tremendous.

As revealed in The Oxford House in Bethnal Green, “On the eventful night of opening [the Heads of the House] proceeded to the club expecting to find perhaps some twenty of thirty lads waiting to join; but what was their astonishment and even dismay they found a large crowd of boys climbing the railings and filling the garden in front of the house”. By 1890, the club welcomed more than 400 members.

Throughout the years, youngsters continued to liven up the handsome,red-brick building with their activities. Many of these were organised by the boys themselves and included carpentry, dramatics, modelling, painting, skiffle, motorcycling, physical training, boxing,football, cricket, table-tennis and draughts.

However, the Webbe Club was not only for leisure. As the Annual Report of 1937 states, “The Webbe helps in finding employment for boys leaving school, visits the sick and assists fathers and mothers in doing the hundreds of jobs that go to make a vital and friendly community of good citizens.”

The club had various sports teams such as the football team which finished second in the league, the table tennis junior team which won first place in the London Federation of Boys’ Clubs Table Tennis League, whilst the senior team topped the list in the Borough competitions.

It was also heavily involved in competitions versus external clubs as well as activities such as boxing at York Hall and swimming in which it produced a backstroke champion. Mixed activities within the club were also encouraged and thus social evenings and dancing classes were held often.

Overall, the Webbe had a great reputation both within Oxford House and outside of it due to its many successes within sporting ventures. The Club remained active until the 1970s, surviving both world wars. 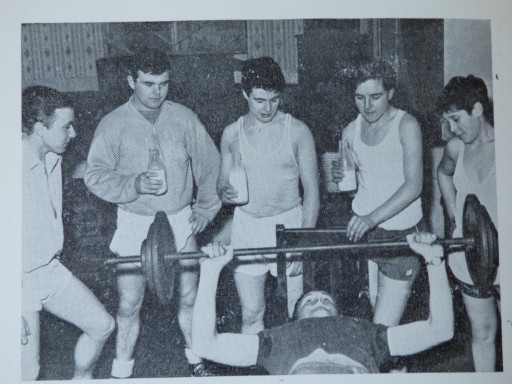 Images:
1. Young boys enjoying reading, table-tennis and arts and crafts in 1950. Oxford House
2 & 3. Young boys up to the age of 18 engage in various activities, from boxing to carpentry. Oxford House
4. Two young boys take part in a Junior Cycling Club trip in 1956. Oxford House
5. A weight-lifting class in the Youth Club, 1961