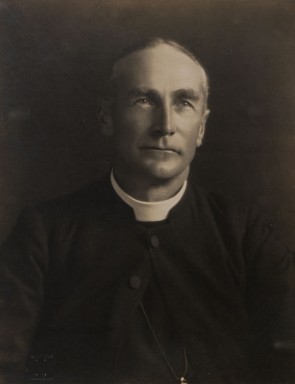 In its more than 130 years of life, several prominent people passed through the doors of Oxford House. In 1889, only five years after foundation, the House welcomed a young curate who was later to become Bishop of London.

A Keble College graduate and sports enthusiast, Arthur Foley Winnington-Ingram served as Head of House for nine years. His uncomplicated character and sense of humour made him popular within the East End community. A few biographers were “amused to note that his accent, previously unremarkable middle-upper-class English, forever afterwards had an east-London tinge”.

Being a man of determination, Ingram sought to raise money for the development of new premises. His fundraising efforts enabled to purchase a new house in Victoria Park Square for “gymnastics and concerts”, a solid five-storey building and the land on which Oxford House now stands.

As the 1892 Annual Report proves, Ingram increasingly attracted residents to Oxford House, including men of sporting prowess such as Hewitt, a rowing blue from UCL and Cross, an excellent runner from New College.

In 1897, Ingram left Oxford House to become Bishop of Stepney and Bishop of London in 1901. His active support towards British troops during WWI earned him the Grand Cross of the Order of the Redeemer from Greece and the first class Order of St Sava from Serbia.

Ingram passed away in 1946 in Worcestershire and was buried in St Paul’s Cathedral. He is commemorated in the Hampstead Garden Suburb area, where a few streets have been named after him. In his nine years of service as Head of Oxford House, Ingram firmly established the roots and foundations of one of East London’s first University Settlements.