Blog > WWI: Zeppelins or ‘Take me back to dear old Blighty’

WWI: Zeppelins or ‘Take me back to dear old Blighty’

One September night in 1917, four hundred people gathered in 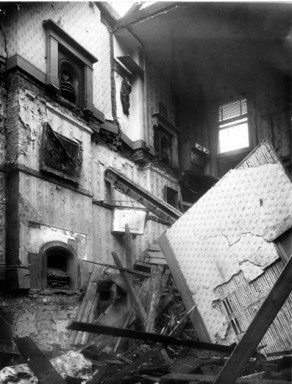 the basement of Oxford House. Within a week, the number of those taking refuge reached as high as fifteen hundred. Singing to drown out the blasts, they sheltered themselves from the bombs that rained across London.

This, though, was not the Blitz. Zeppelin raids over Britain had begun in 1915, and reached their peak in 1917. By the end of the First World War, more than 1000 people would be killed in air raids. The East End was badly hit; in nearby Poplar, one school would lose 18 students in one raid, all between the ages of four and six.

Despite warning from the police that Oxford House’s basement offered no particular protection, the House opened its doors to the public, arguing that ‘the raison d’être of Oxford House has always been to help the inhabitants of Bethnal Green’ and adding that ‘it would have been an absolute waste of time to persuade people to return home.’ 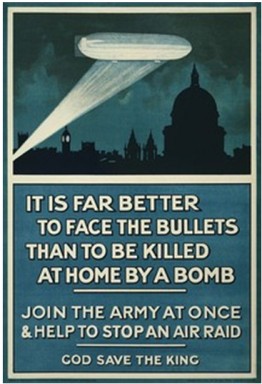 The sheer numbers presented a substantial challenge to the young theology students who ran Oxford House. One admitted that ‘in the air raid a serious-minded student of social affairs is useless: what is really wanted is a man with a loud voice who knows the words to ‘Take meback to dear old Blighty.’’

Forced to limit the numbers they took in, they decided to admit only women, children, and fathers of families, in the hopes of excluding the ‘very undesirable youth who simply comes in on the chance of a lark’. In fact, not all were so worried about the blasts. The Oxford House Club even insisted on staying upstairs to play cards during the raids.

Despite the real danger of overcrowding and panic, Oxford House continued to provide shelter throughout the war— as one resident wrote at the time, ‘we just go on hoping for the best.’